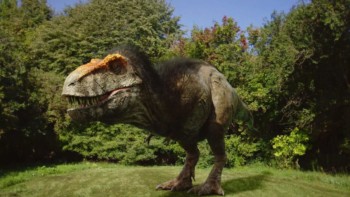 Tyrannosaurus rex was the most formidable predator on Earth and often gets a starring role in Hollywood movies.

But “Tristan,” the T. rex you’ll meet in the Nature of Things doc, The Real T. rex, is very different from the ‘king of the tyrant lizards’ in Jurassic Park. Now scientists have discovered that almost everything we thought we knew about T. rex is wrong.

In the movies, T. rex is often seen chasing down speeding cars in pursuit of a quick meal. We assumed that he was quick on his feet like his modern relatives, the ostrich and emu, who can reach speeds of 60km/h.

But scientists have discovered that Tristan’s size and weight would have made him much less agile. John Hutchinson, a professor of Evolutionary Biomechanics at the Royal Veterinary College, found that the giant dinosaur reached speeds of 16km/h — about the jogging speed of a human. The real T. rex would have found it impossible to keep up with a speeding car.

But Tristan didn’t need to run any faster. At that speed, he could easily chase down the slow-moving herbivores that it preyed upon.

All Rumble and No Roar

In Hollywood movies, T. rex’s calls often sound like a roar. “Large carnivores today, most of them are mammals, and roars are the sounds they produce,” says paleontologist, Julia Clarke. “But when we think about T. rex, this is an animal most closely related to birds and alligators and crocodiles, and those animals make very different kinds of sounds.”

To find Tristan’s real voice, Julia Clarke, along with naturalist Chris Packham, looked at some of his closest living relatives. Large reptiles like alligators and crocodiles produce deep sounds — low, ominous ‘booms.’ Using 3-D scans of T. rex’s skull, the team learned that its hearing was tuned to one low-frequency sound — the call of another T. rex. To replicate Tristan’s voice, they took the call of a modern Chinese alligator and lowered it to the level of T. rex’s hearing. The result? An eerie deep and threatening rumble that could be ‘felt’ as well as heard.

“This could be the first time for 66 million years that this sound has been heard on Earth,” says Packham.

These low-frequency rumbles allowed Tristan to communicate over long distances, just like elephants and blue whales do today.

In the movies, T. rex is a scaly lizard, with drab colours and no patterning. But many modern-day reptiles today sport striking colours; blues, yellows and reds are used for communication. So it’s likely that Tristan also had a more colourful look, maybe even a camouflage pattern, much like the tiger stripes or leopard spots of modern predators.

By analyzing T. rex’s fossils, Julia Clarke found evidence of melanin, the same pigment found in human skin and the feathers of some modern birds. Like hawks and eagles today, Tristan probably had patches of brown, black and grey. Lawrence Witmer, a paleontologist at Ohio University, also found the bony ridges around Tristan's eyes. So like modern birds, Tristan’s eyes may have had bright yellow or orange rims, used for communication.

Tristan had more in common with modern birds than just colour. New fossil evidence shows that T. rex had simple feather-like structures, or bristles, adorning its back and shoulders. These bristles may have been used to display strength and maturity to attract mates, much like a lion’s mane. And for the ‘king of the dinosaurs’, a flowing mane of bristles only seems fitting.

Watch The Real T. rex on The Nature of Things