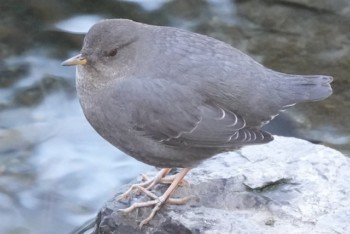 You may have heard of birds swimming underwater — but how about walking?

Well, naturalist Brian Keating says that's precisely what the American dipper — otherwise known as the water ouzel — does on a regular basis.

On a recent backcountry cross-country skiing trip, Keating and his wife spotted four dippers in two different locations after being alerted to their presence by their distinctive song.

"In fact, an excited dipper will dip 50 times a minute … they do it for a living."

Keating said the dipper is the size of a plump robin with its tail cut short and can look almost like a grey tennis ball.

The birds are slate grey and blend perfectly into a cobblestone creek if they are standing motionless.

Keating said the birds communicate by blinking rapidly to expose a flash of white feathers on their upper eyelids, which is a form of expression in courtship and threat displays.

The bobbing is a visual communication, Keating said, citing one study done on spotted sandpipers which have a habit of bobbing their tails up and down.

"It indicated that the louder the whitewater noise, the greater the intensity and frequency of the tail going up and down," he said.

"Now I don't know if that's the case with dippers, but I suspect it is — it's basically a way of communicating when there's a lot of loud whitewater noise behind you."

But the birds' unique qualities make them especially well-suited for their environment. Take how they use their eyes underwater, for instance.

"They've got well-developed focal muscles in their eyes that can change the curvature of the lens to allow them to see underwater," Keating said.

"They've got nictitating membrane too, so it's a third eyelid that covers the eye, protects the eye, when they go [underwater]."

"They will sometimes perch on the rocks and just feed off the edge of the rock. They often grip the rocks firmly and then they walk down into the fast-flowing water, and they disappear completely," Keating said.

"They sometimes use their wings to swim, but they can walk underwater with strong claws. They can go down as deep as six metres, which is crazy."

Dippers have a large preen gland, which they use to waterproof their feathers. They've also got a very high hemoglobin count in their blood, which allows them to store a greater amount of oxygen.

"They've been recorded to stay under the water for 30 seconds or more, which is a pretty long time for a tiny little bird," Keating said.

Add in a very low basal metabolic rate — about a third slower than a typical comparable terrestrial bird — and dippers are also equipped to conserve energy in cold mountain creeks.

"It's amazing to see these birds in the winter or the summer," Keating said. "But in the winter, seeing them go in and out of the icy cold water — it's just ridiculous."