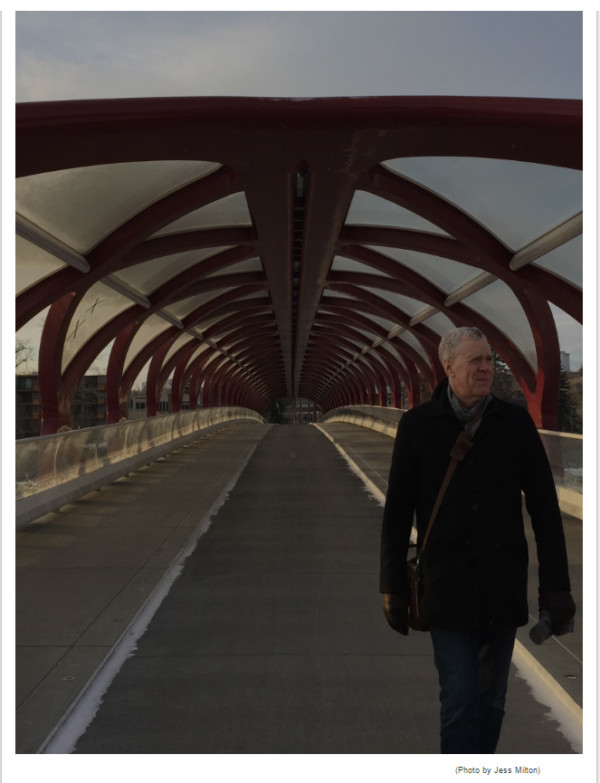 Stuart McLean, the host of CBC Radio's The Vinyl Café and an award-winning humorist, died at on February 15th, 2017 at the age of 68.

McLean's trademark blend of storytelling — part nostalgia, part pithy observations about everyday life — and folksy, familiar delivery made him a hit with audiences for more than 20 years.

We never met, but Stuart McLean was a welcome guest in our house every weekend. If we missed him on Saturday, we caught up with him on Sunday. He was a guest who we all wanted to stay for longer because we felt so good in his company.

Once in a while, crazy things would happen in our own lives and we'd think, "That would be a good Stuart story,” like the time we helped a beaver carry its tree across a road during a family drive. We could hear his voice narrating the absurdity of it all.

We will miss his beautiful voice very much. We often heard him joke about his lack of singing prowess, but he hit vocal notes that could pierce your heart and soothe your soul. His stories were wonderful gifts he gave us, and we are very grateful for the gift that was Stuart McLean.

The first time I heard The Vinyl Café, it was because my friend recommended it, saying it was funny. I was a new immigrant at the time so I wasn't sure I would enjoy Canadian humour, but being the polite Korean, I obliged.

The next thing I remember is laughing very hard for most of the show.

I didn't laugh out of ridicule: I laughed out of relief and comfort. I no longer felt like the immigrant who didn't know how to cook a turkey and had her also-immigrant friends starving till late in the evening. I was simply one of the many Canadians who had a panic moment with a frozen turkey because it was my first time cooking it. This story that I heard that day was "Dave Cooks the Turkey."

Stuart McLean had that magic: to translate stories into compassion, then into feeling connected as Canadians. He will be greatly missed.

I actually wrote this in 2010 and never thought I would send this. It somehow seems more appropriate to send it now.

Dear Stuart: I have been listening to you on CBC since at least 1985 on your early years of Morningside with Peter Gzowski. I have been able to escape some not-so-nice times in my life, even if only for an hour or so a week over the years. The loss of a son at birth, a premature daughter, bad business decisions and the usual personal stress that comes along with any family — all were endured and overall we have really had a great life with so many blessings.

My daughter Cassie was born in 1992 ... She came into this world born at 26 weeks weighing a whopping 2 lb. 8 oz! After my wife spent three months in the Grace Maternity hospital fighting to get that far along, that was followed by Cassie spending two months in ICU and incubators. Everything worked out perfect in the end, and we never looked back after we left the hospital. Cass has now grown into a wonderful lady. I am proud to call her my daughter.

Ever since Cassie was a baby, every Sunday we tried to make time to listen to The Vinyl Café. Sometimes, the whole family, sometimes just Cassie and myself, sometimes me alone. You even helped with colic a couple of times. You talked while I drove with a screaming baby in the back seat.

Somehow the stories and music on your show made me dream of childhood memories where a simple piano, talented voices and good stories were all that was needed for entertainment. I always made a point to tell Cassie how special your show is and to pay attention while we can, because someday this show will be no more.

Over the years, I did get a couple of your books and also the Christmas story collection CD. One year, magic happened. My wonderful daughter finally gave me a gift that was totally unexpected. While opening my present from her I could see little tears starting to well up in her eyes and the million dollar smile and look of anticipation was all over her face. My present was a used copy of your book The Morningside World of Stuart McLean. She found it at a used bookstore and urged me to open it up. "It's autographed inside," she said. When I opened the cover, there were two tickets to your March 7, 2010, show in Halifax. I couldn't have asked for a better gift.

Cassie and I had a special father-daughter evening with dinner and a great show afterward. We enjoyed it even more than we thought we could! If it was possible, we would love the opportunity to meet you next time you are in Halifax, just to say hello and thanks, and have Cassie meet one of the people who I know has helped to shape her personality and taught her to appreciate a great story. 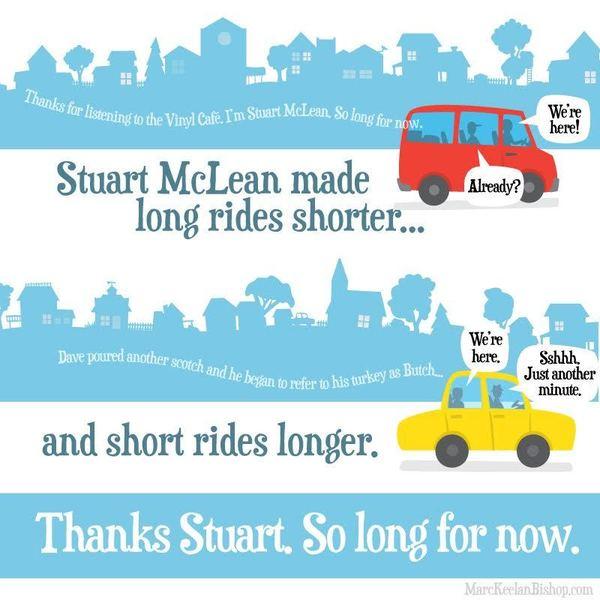