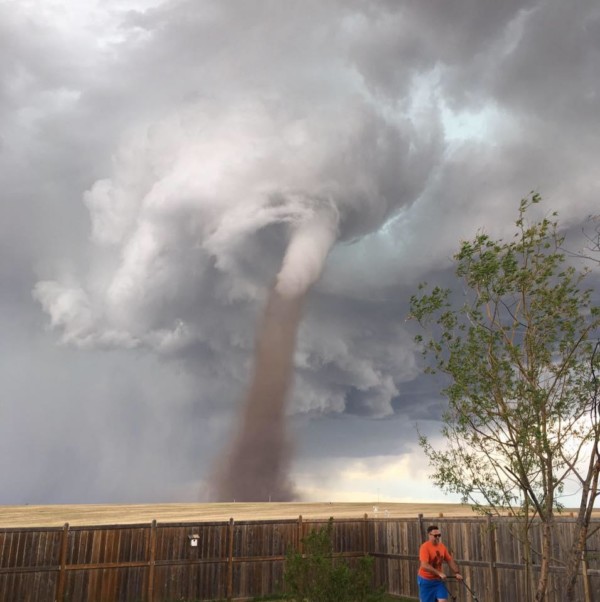 Theunis Wessels mowed his lawn at his home in Three Hills, Alta., on Friday as a tornado touched down nearby. The photo caused a bit of a storm on social media. (Cecilia Wessels/Canadian Press)

After this shot was captured of the "Man Who Mowed his Lawn with a Tornado behind him" the photo of this man has gone viral.

It has been noted in newspapers and media from all around the world including in the Guardian, Hindustan Times, BBC News, Washington Post, Time, Mashable and so many more. It has also inspired much conversation, deep thought such as Twitter comment by elliot "The tornado is my self destructive tendencies, the lawn is my life" and many memes such as Instagram comment by windriverroofingrestoration "Nothing can come between a Dad and his yard work".

Here is an article from The Canadian Press.

'It looks much closer if you look in the photo, but it was really far away'

A photo of a man in Alberta mowing a lawn with a tornado swirling behind him has been causing a bit of a storm on social media.

Cecilia Wessels snapped the picture of her husband, Theunis, on Friday evening as the twister passed near their home in Three Hills.

She says cutting the grass was on her husband's to-do list, and as he started the task, she went for a nap.

Wessels says she was woken by her nine-year-old daughter who was upset that there was something like a tornado in the sky, but her father wouldn't come inside.

Theunis Wessels says the tornado was actually much further away than it appears in the photo, and that it was moving away from them.

There have been no reports of injuries from the tornado, although some other photos show downed trees and a barn with its roof ripped off.

"I literally took the picture to show my mum and dad in South Africa, 'Look there's a tornado,' and now everyone is like, 'Why is your husband mowing the lawn?"' Cecilia Wessels said Saturday.

"Our whole street, everyone was on their back patios taking pictures," she added.

Theunis Wessels said he was keeping watch of his surroundings and saw the twister form as the swirling connected from the sky and the ground to form the funnel.

Theunis said he watched a TV program about storm chasers, so he's familiar with them.

The tornado moved away to the east, he said.

"It looks much closer if you look in the photo, but it was really far away. Well, not really far, far away, but it was far away from us," he said.