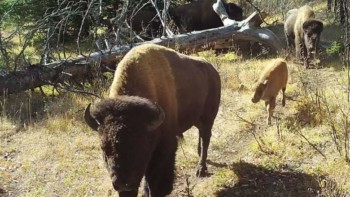 'They're frolicking and nursing and playing,' says Parks Canada official

A pilot project that began with 16 bison being introduced to Banff National Park has led to a bison baby boom — and a healthy herd of 63 animals that includes 16 new calves.

Those keeping an eye on the herd initially reported 13 new calves last week, but anticipated that more had been born since the count. Three more were spotted by Monday morning.

The herd was introduced to the park in February 2017 as part of the five-year Banff Bison Reintroduction Project.

The aim is to test the reintroduction of wild plains bison to the park's ecosystem.

Stevens says the annual growth rate of the herd is "upwards of 30 per cent" and that is a good indicator the herd is healthy.

The animals are tracked from a distance using spotting scopes and trail cameras.

Part of the reason for the high herd growth, says Saundi Stevens, is that natural predators like wolves are still learning about the bison, which haven't been in the area in nearly 150 years. (Submitted by Parks Canada)

Stevens says that within minutes of being born, the new calves are highly active.

"At this young age, they're just lively. They're frolicking and nursing and playing," she said.

"And what's most amazing is they're traveling and keeping up with the main herd," she said.

She says they are able to forge rivers and climb mountainsides to keep up.

"I think just the most fascinating part of this is just seeing how well they're settling into their landscape," said Stevens.

The herd's high growth rate is likely due to the fact they haven't experienced many effects of natural population management yet. There has been no deaths of the mature animals so far.

Stevens says wolves may not be used to preying on them because bison had not been in the area for 140 years.

"We're seeing mutual curiosity between bison and wolves … but right now I don't think the wolves have quite discovered what potential prey source the bison can be," she said.

Of the three young bison that died last year, Stevens believes one was caused by wolves, who will typically prey on young calves during calving season.

The others died by unknown causes. So far this year, one calf has died.

The herd is contained to a 1,200-square-kilometre reintroduction zone, on the park's eastern slopes.

At this time of year, they are grazing on grasses, sedges and foliage like willow bushes.

Stevens says the herd moves quickly, and during the summer they will move up to higher alpine areas where "the vegetation growth is far more succulent and palatable and nutritious to the bison."

"They're really occupying all corners of the reintroduction zone," she said.