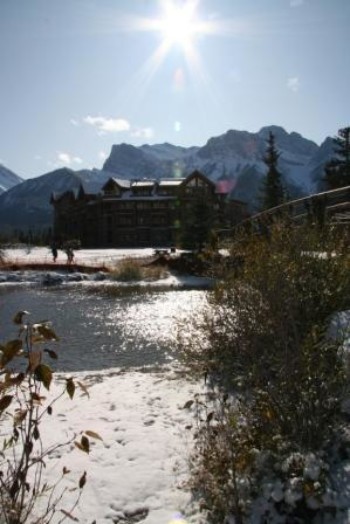 While our Team is keen to celebrate appreciating property values, particularly representing Sellers, Buyers can also benefit (in the future).

HOWEVER, for Can~morons (an affectionate term we call ourselves) that live here full-time, we know too well that any increase in the value of real property impacts rental rates for residential properties. One bedroom condo rentals have moved from $900/month in 2011 back to pre-2009 prices of $1300. Two bedroom condos rent for $1800-$2000/month.

That is why both the Towns of Banff and Canmore have, for years, contributed land and invested through Housing Corporations to build Affordable Housing projects.

Many millions of dollars have been contributed by three levels of Government to provide more affordable housing in our two communities. As an example the Town of Canmore has collected a Perpetually Affordable Housing (PAH) fee on property taxes that funds the various programs of the Canmore Community Housing Corporation (i.e. McArthur Place, Mine Side, Coyote Ridge, Hector, Hawks Bend and others). Private developers are now either partnering with the Town or on their own recognizing there is a business case for apartment style rental units. In the next two years over 200 new rental units will be added to inventory on Old Canmore Road behind the Coast Hotel. On Oct. 3, 2017, council approved a Development Permit for a 90 unit multi-family apartment building within the Coast Apartment Direct Control District. There are 40 one-bedroom units and 50 two-bedroom units planned.

Land Use Zoning has also provided housing opportunities for those working a minimum of 20 hours a week in the valley, not permitting occupancy to those looking for recreational properties. In the Townsite of Banff the National Parks Act restricts ownership and rentals of property to those who have either a business in Banff or a need to reside through employment.

Accessory dwelling units can be:

Since Canmore has high housing costs and a housing shortage, accessory dwelling units can help improve housing affordability and supply. They can also support affordability for those living in existing neighbourhoods where transit, cycling, and walking are more available and practical.

What does Perpetually Affordable Housing (PAH) mean?
PAH is a community investment in Canmore's housing infrastructure, which allows CCHC to provide homes at below-market prices to eligible households. To ensure that the community's investment and the "perpetual affordability" are retained for the benefit of future residents, resale and rental price formulas are used. This means that if you own your PAH home, a resale price formula indexed to inflation is used to calculate how much your home may increase in value each year. If you rent your PAH home, current rental rates are at least 10% below market rental rates.

Affordability Index
While Calgary traditionally has seen greater affordability of housing compared to wages than say Vancouver with lower average wages and higher cost of living, Canmore suffers from affordability. The large number of Tourist sector jobs and high cost of living means our Affordability index is quite low. Many workers here engage in more than one job in order to make ends meet.

New projects in Banff ~ Two young Albertans are turning shipping containers—also known as Sea-cans— into hotel suites, affordable housing units, staff accommodation and even cottages. They use the Sea-can as a shell and join and stack them like building blocks to create a comfortable place to live.

“It is narrow, but that’s only one. And you put two or three together with the proper floor plan and it opens it up just like it would a house,” said Chris Van Arnam, co-founder of Blocks Modular.

The Carstairs-area business is also in discussions with the Banff Hotel Commission to build Seacan staff accommodations for workers, to ease the housing crunch there.
https://www.cbc.ca/news/canada...

New projects in Canmore completed in 2018 are “The Peaks”, 148 rental rate restricted apartments at 1451 Palliser Way.

New Projects in Banff include:

“The Courtyard Project will add 33 affordable housing units on YWCA Banff property. For release on October 23rd, 2018 in Banff, Alberta.

YWCA Banff is pleased to announce a major milestone in the funding of its Courtyard Project, receiving both federal and provincial contributions for its proposed housing units. Cameron Westhead, MLA for Banff-Cochrane, representing Lori Sigurdson, Minister of Alberta Seniors and Housing, announced the provincial government’s significant contribution of $2.6 million for the sustainable housing complex. The federal government through the National Housing Strategy’s Affordable Housing Innovation Fund is also providing YWCA Banff with a major contribution. The Honourable Kent Hehr, Member of Parliament for Calgary Centre, on behalf of the Honourable Jean-Yves Duclos, Minister of Families, Children and Social Development, made a significant commitment of $1.35 million to the Courtyard Project. The overall cost of the Courtyard Project is estimated to be just under $9 million. YWCA Banff will cover 20% of the total cost with a contribution of land for the project.

We are just delighted at the financial investments of both the federal and provincial governments are making for the Courtyard Project,” said Connie MacDonald, CEO of YWCA Banff, “It’s an investment on so many levels, for the town of Banff, our environmental commitment to Banff National Park and of course the families and individuals who are unable to find suitable housing.” The new funding by the Provincial and Federal governments will be used to build housing for residents who face barriers to finding suitable accommodation.

The Courtyard Project will bring in families with multiroom housing units, ranging from studio to four-bedroom apartments. The Courtyard will be ideal for women, new and extended families, individuals, and people with accessibility challenges.

Effect on Rates of Private Rentals

Impacts on Recreational Property
For years the Town of Canmore has largely turned a blind eye to the use of Recreation Property zoned for short-term stays only (up to 30 days at a time) for long-term rentals. This has been due to the scarcity of rental accommodation now sitting at 0% and also that after the economic collapse of 2009, many Visitor Accommodation condos sat empty, costing their owners a ton of money in lost revenue.

Now however, with in excess of 4 million visitors coming through the Bow Valley each year, occupancy levels for Visitor Accommodation units has reached levels unheard of before, approaching 65%, year-round. With nightly rentals upwards of $500 per night, depending on size and quality of Visitor rental, it makes good sense for owners to be utilizing these condos for what they were intended; personal use and legal nightly rentals. Taking long-term rentals out of inventory does however put pressure on demand and increasing rental rates.